The ‘Law in the Aberdeen Council Registers’ project and the ‘aberdeenregisters.org’ website were launched officially at a civic reception in the magnificent Town and County Hall at Aberdeen Town House on Wednesday, 8 June 2016. 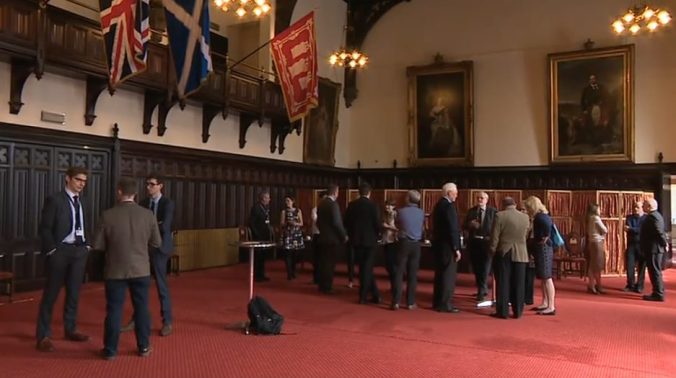 Aberdeen’s Lord Provost, George Adam, spoke on behalf of the City, while University Librarian, Diane Bruxvoort, represented the University of Aberdeen. Moderating proceedings was project partner and City Archivist Phil Astley, who also spoke briefly, as did project director Jackson Armstrong. All expressed their delight that the eight UNESCO-recognized volumes of the Aberdeen Council Registers would be made available to a wider audience as part of this collaborative effort. Formal proceedings ended with a brief presentation of a collection highlight by Edda Frankot. A written version of this presentation, which focussed on the use of memory in the establishing of the age of a girl as part of a court case in 1507, will appear on this blog in due course.

The event received some press coverage on Wednesday and Thursday. STV News reported on the event in their local news bulletin which included a brief interview with Phil Astley:

The Press and Journal also covered the story, both in their North East and Aberdeen editions and online:

In light of the press coverage we wish to be clear that the two partner institutions involved in the present project are the University of Aberdeen (Research Institute of Irish and Scottish Studies) and the Aberdeen City Council (Aberdeen City & Aberdeenshire Archives). We also wish to note that the present project seeks to produce an accurate and full transcription of the register volumes. The translation of that corpus into modern English is not intended; that is a separate opportunity for the future which will require its own specific funding. Our objective is to provide the transcribed text for a wide range of potential applications and analyses.