The Aberdeen Council Registers are unique survivals within a Scottish context: Aberdeen is the only burgh for which a nearly complete set of such books for the fifteenth century is extant. But within a European context Aberdeen is far from unique: many town archives in Europe have collections of medieval records, some of them much larger and stretching back into the fourteenth or even the thirteenth century. They provide important potential comparative material for the Aberdeen registers. In the context of my PhD research and focussing specifically on cases of maritime law, I had already looked at very similar material from the towns of Kampen (Netherlands), Lübeck (Germany), Danzig/Gdańsk (Poland) and Reval/Tallinn (Estonia). Very recently, I had the privilege to be introduced to another set of urban registers: the Reformationes and the Acta Consiliorum of Dubrovnik in Croatia.

I was in Dubrovnik from 20 to 22 September to attend the ‘Mapping Urban Changes’ conference in the context of a proof-of-concept project which I am co-leading with Dr Adelyn Wilson from the School of Law called ‘Spaces of Power in Interregnum Aberdeen’. This sister project of LACR is funded by RIISS under a research development grant. It seeks to visualise the use of the physical space within the burghs of Old and New Aberdeen for the exercise of political, religious, mercantile and administrative power. In addition to presenting this project, I was at the conference to learn about relevant other projects and useful techniques and methodologies. In this respect the conference was very fruitful.

Visiting Dubrovnik also provided the opportunity to learn more about the Du:cac project, which has just been completed. This project, led by Dr Ana Plosnić Ŝkarić of Zagreb University, aimed to transcribe all relevant entries or deliberations from the period 1400-1450 concerning the spaces and buildings within the walls of Dubrovnik and link these to a searchable map. The Du:cac website includes a custom-made map with clickable points, indicating actual buildings, spaces near them (in those cases where a house is said to be near a church, for example), streets and neighbourhoods. These link to relevant transcriptions. The transcriptions will also be published as an e-book.

A screenshot from the Du:cac website, showing a map segment with clickable points.

The government of Dubrovnik was made up somewhat differently to that of Aberdeen. The city had three councils: the Major Council, the Minor and the Senate. Up until 1415 the deliberations of all three councils were kept in the same book, called Reformationes (these were begun in the late thirteenth century). From 1415, they were divided up into three registers. From the years between 1400 and 1450 there survive three volumes of Reformationes, nine volumes of Acta Consilii Maioris, twelve volumes of Acta Minoris Consilii and eleven volumes of Acta Consilii Rogatorum, comprising a total of 15,944 pages (the Aberdeen Council Registers from 1398-1511 comprise 5239 pages). The volumes are almost completely in Latin, with occasional words in Croat and some entries in Italian, which was used as a lingua franca in the Adriatic region, as Ana Plosnić explained to me. Latin was used in these registers until the end of the Dubrovnik republic in the late eighteenth century.

Just before I had to catch a plane back to Aberdeen via Paris and had to leave the beautiful city (and weather) behind, there was an opportunity to visit the archives which are in the Sponza Palace, one of the few buildings which survived the 1667 earthquake in Dubrovnik unscathed. There, Ana Plosnić kindly showed me some of the fourteenth- and fifteenth-century registers. The page layout of these look very similar to those of the Aberdeen books: with marginal headings and clearly recognizable entries. The Acta Consiliorum also include deliberations on elections, which provide interesting comparative material for the entries recently uncovered in Newburgh’s registers by LACR’s William Hepburn (see the post on his visiting scholarship at St Andrews University Library Special Collections). In Dubrovnik votes could be cast not only in favour of candidates, but also against them, and relatives were excluded from voting for a specific person (indicated as ex. or extra). 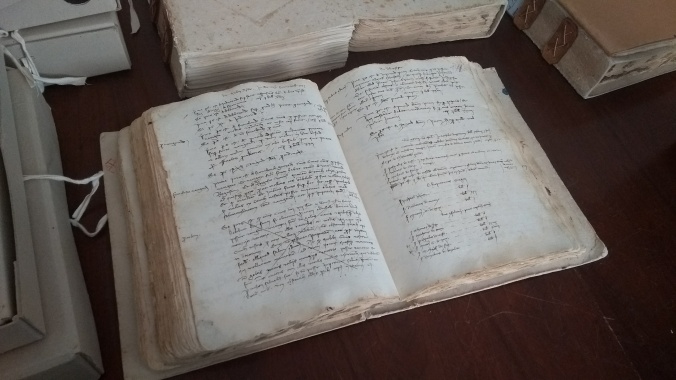 All in all, this encounter with the Dubrovnik material once again stresses the importance of considering the Aberdeen registers in a European context.